I rode an electric bike in Melbourne’s city traffic! My experience with the eBike Butler.

Any page on this website may contain affiliate links. Please see our disclaimer for more info.

Why did I want to hire an ebike in Melbourne?

E-bikes are an awesome way to explore and commute with minimal impact. They require less effort on our behalf than a regular bike, making them perfect for travelling to work or exploring for whole days while travelling. And they can go faster than push bikes, too, so you can ride further and last longer!

Riding any kind of bicycle through Australia’s second largest city isn’t something I used to imagine myself doing. I only learned to cycle a few years ago and though I love it now, I come from a fairly small town and I’ve never even driven a car in the big city traffic!

Still, I was keen to try riding an e-bike in Melbourne, as I’ve enjoyed cycling on other holidays (such as riding around the base of Uluru), and I love to use more sustainable transportation methods than cars and planes when possible. In all, I used four different low-emission transportation vehicles: a bus and a train to travel from my hometown Mildura to Melbourne, the excellent tram network within Melbourne’s CBD, and my lovely electric bike!

If you’re interested in e-bikes as a more permanent part of your life, this post lists 6 reasons why you should buy an electric bike. There are many circumstances in which it’s a great decision to make! 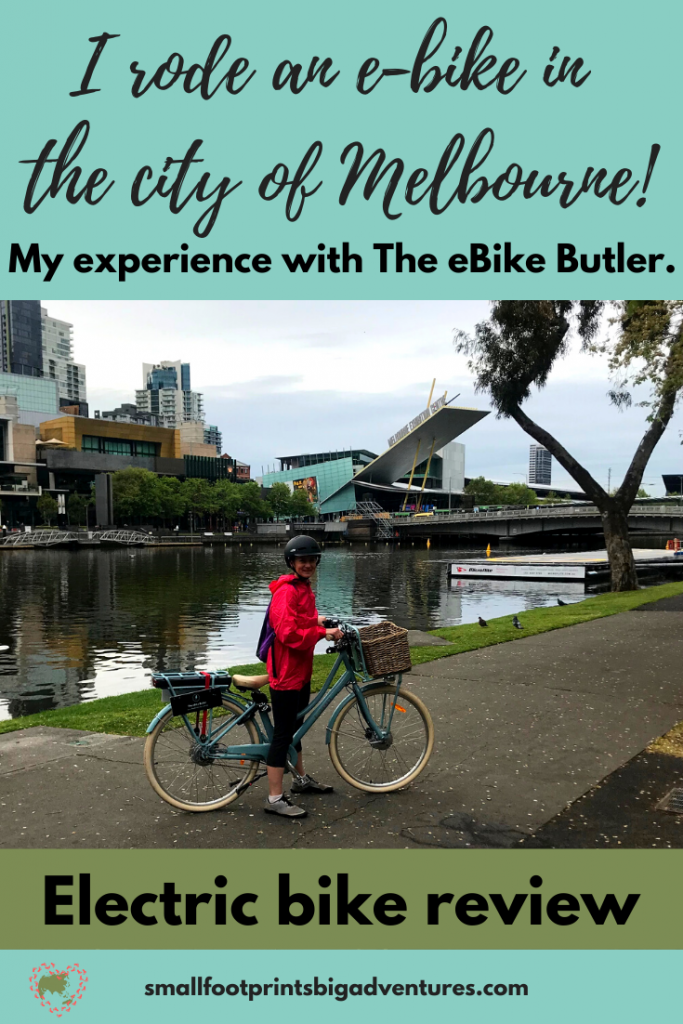 Melbourne locals Brett and Cassie from The eBike Butler offered to loan me one of their bikes when I got in touch about my minimal-emissions plan, in return for this honest review. They both love to cycle and to be outdoors, and have excellent knowledge of their city and it’s ever-growing bike network.

Their e-bike service includes dropping off the bike and collecting it again, which I really appreciated. Ebikes are heavier than regular bicycles, and it was a relief not to have to worry about navigating it back to them, especially in bad weather. The delivery service is included for free within their ebike hire rates.

Brett dropped off my wheels in the evening, and took as much time as I needed to explain how to use the e-bike and secure it properly. He also suggested where I could go nearby to practice away from the inner city traffic, and suggested some great cycling tracks and routes within the city with bike lanes. 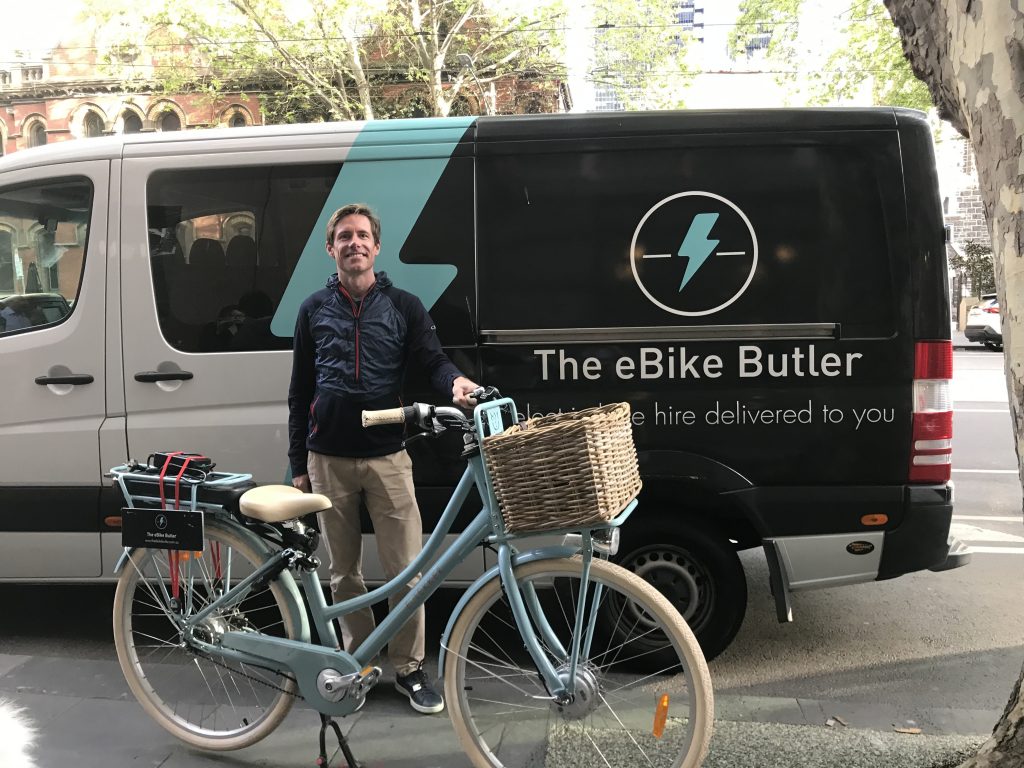 Brett from The eBike Butler dropping off my bike.

The eBike Butler uses Lekker bikes, which are one of the most popular bike brands. They don’t have electric mountain bikes for hire at this stage. Their electric bikes are the hub drive type (not mid drive) with 250W, 14.5h motors.

The battery on these e-bikes has a range of 50-85 kilometers (31-52 miles) on one charge. Each bike comes with all the accessories you’ll need including an Australian-certified helmet, a charging cable, a secure AXA lock, lights, and an optional basket on the front.

Learning how to ride an electric bicycle

The next morning I walked the bike for a few minutes to the little park Brett mentioned, and did my test ride doing laps around the track. Brett had told me that the e-bike only accelerates when I would pedal AND when I had the motor switched on. Otherwise it works just like a regular bicycle.

When the motor’s engaged, acceleration only occurs when pedalling forwards, so as soon as I stopped pedalling it would cut out. This feature is excellent as it removes the need to keep fiddling with the controls: you can just ride quite normally and get an assist from the motor when you’re pedalling. 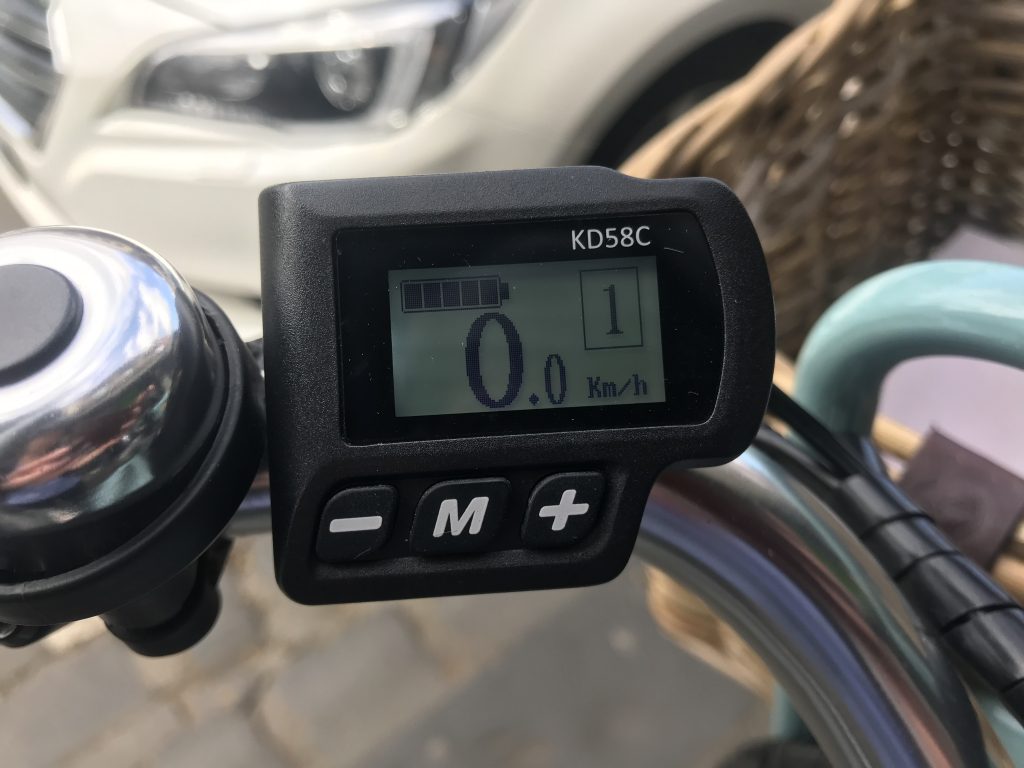 You can still make adjustments while riding though, from speed 1-5 depending on how fast you want to go, or to turn the motor off completely. This dial also keeps track of your speed and the battery life, and on the other handle you can adjust the incline from steep to flat.

Riding my e-bike in Melbourne’s CBD

With confidence gained (and the morning rush hour over!) I ventured into the city traffic. Right from the start I really liked the boost the bike gave me when accelerating from a stopped position. It made crossing busy roads much less stressful than riding a regular bicycle would’ve for me.

There were many bike lanes to take advantage of which was also great, and even when I had to crawl through thick traffic without a bike lane, I could hold the e-bike steady despite its weight. This is the only video I could get as I was travelling alone! Thanks to the lovely Amy at my awesome green hotel The Alto on Bourke for filming this.

After some time in the traffic I felt brave enough to increase my speed on long stretches on road. But I still got passed by most other cyclists — yes even those on regular bikes! Not knowing my way around and still getting the hang of riding in a city meant that I wasn’t comfortable going very fast. I was still proud of bumping up to speed three a few times though!

On the topic of navigating: I used Google maps on my phone, and was very glad that I’d brought my phone tripod along on the trip. I attached the tripod to the ebike’s basket with a rubber band, so I could see and hear the navigation while riding. I definitely recommend having some way to secure your map if you don’t know your way around, too, as it would be a giant pain to keep getting your phone out while riding. 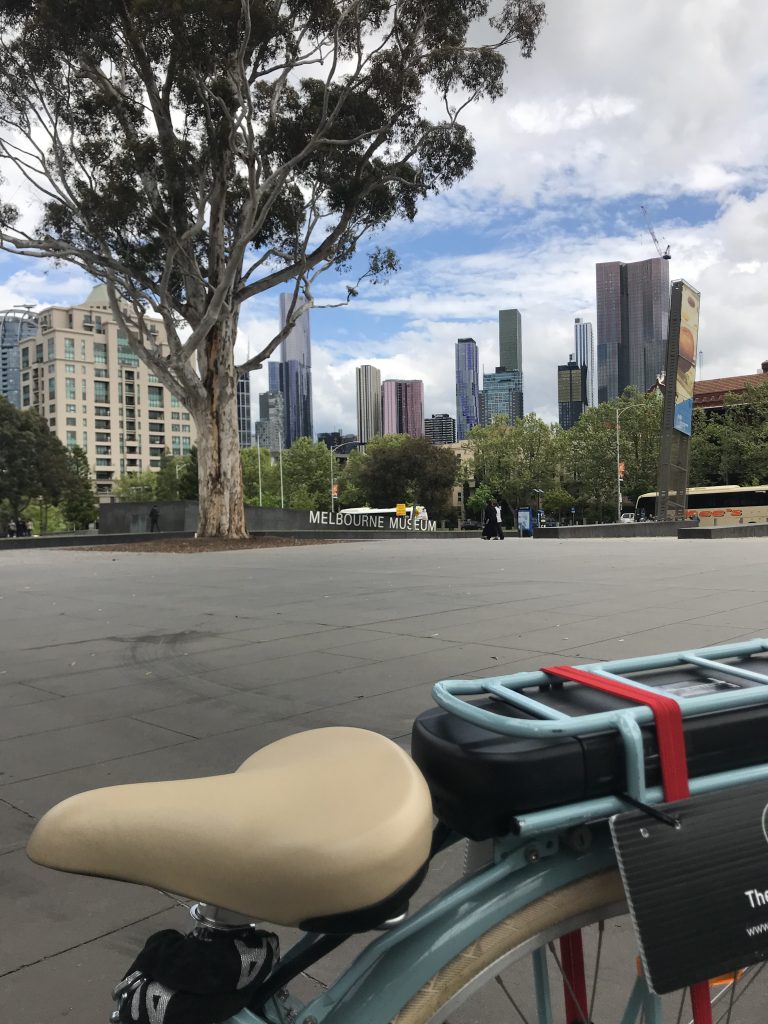 It was a beautiful day to be exploring Melbourne by e-bike!

I rode over 10 kms around inner Melbourne, to some shops in Fitzroy and the Melbourne Museum. It was lovely to be able to travel as fast or slowly as I pleased, and to take in the sights and sounds along the way. I felt safe leaving the ebike when I was shopping or exploring: securely locking it was easy and only required carrying around a small key, which stores safely in the lock while riding. 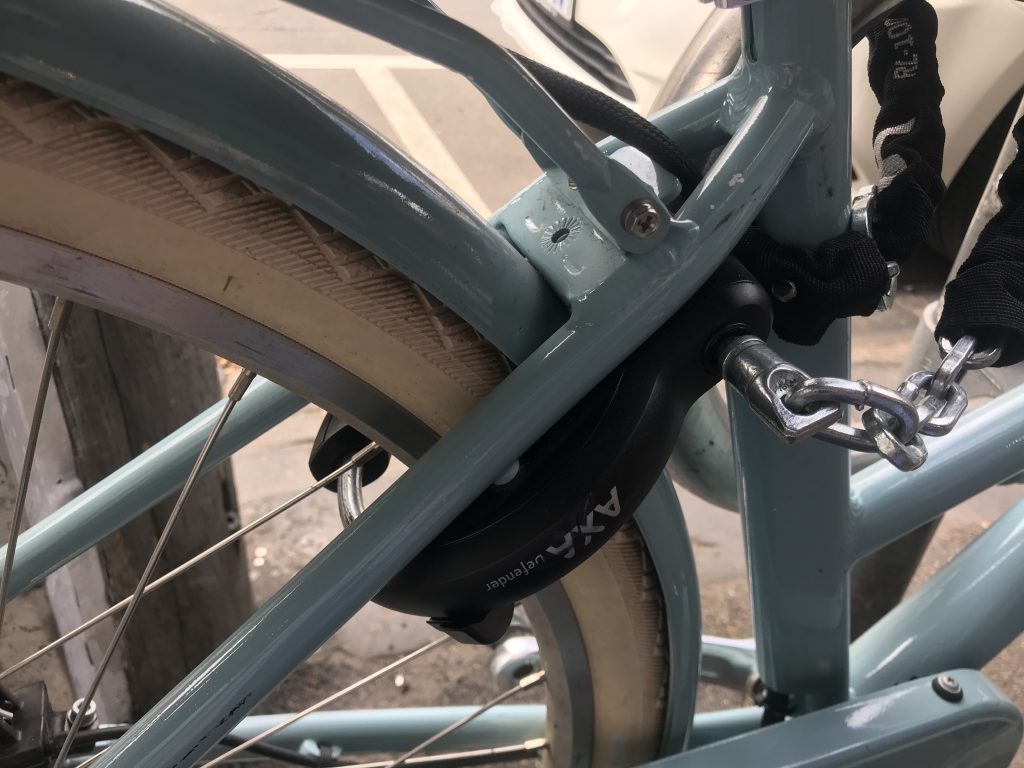 I was very glad the threat of rain didn’t eventuate that day. I wouldn’t have liked to be riding on very wet roads. Often pedestrians weren’t very aware when crossing the bike lanes, with their eyes on their phones or their hearing lost to headphones. I almost collided with one on a downhill slope despite ringing the bell and yelling out to them, and had to slam on the brakes in order to stop in time. The following day it did rain quite heavily so I didn’t get on the bike again, and was very grateful for the tram network. 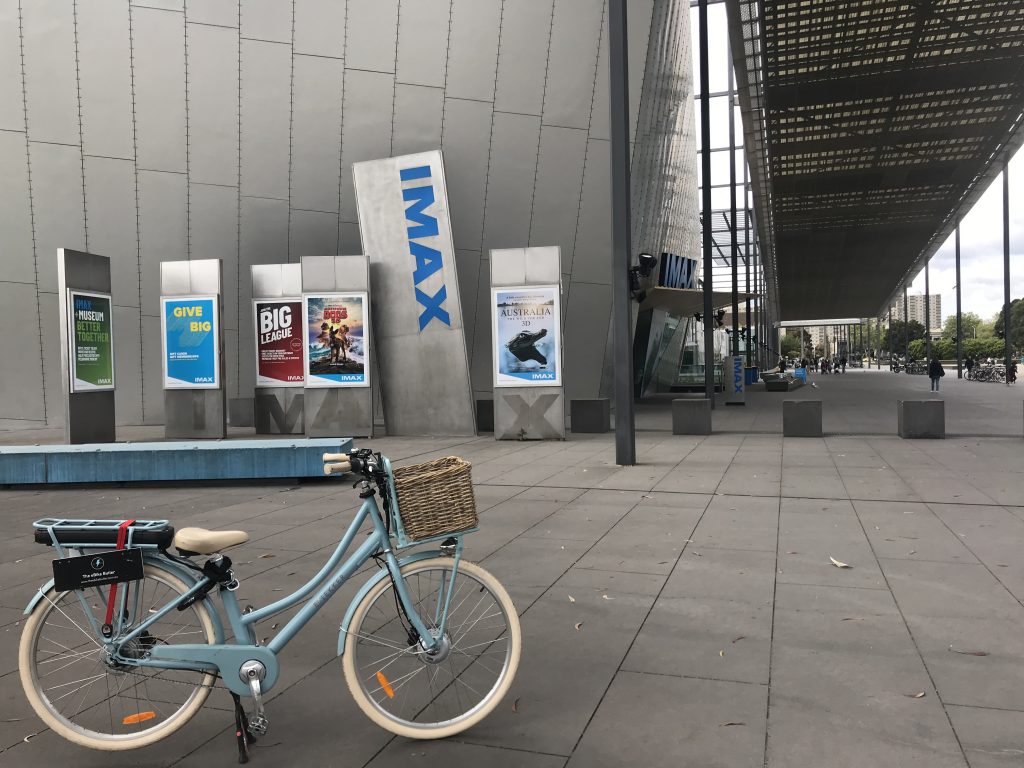 Outside the Melbourne Museum and IMAX theatre.

That incident was the only time I felt really unsafe. Motorists are used to cyclists and electric bike commuters, and indeed I saw many electric couriers and a few other recreational e-bikes on the roads with me, too. The bike lanes are quite good and I believe they’re still improving in Melbourne, so cyclists will have even more safe networks to ride in.

I would definitely hire an electric bike again, as it was such a fun way to explore. I also have no hesitation in recommending The eBike Butler for your Melbourne electric bike hire needs: their service is prompt and friendly, they’re quick to communicate and thorough in their explanations, and their bikes and gear are clean and kept in top condition. And their delivery and pick-up service is really helpful, especially when you’re travelling without any transport of your own.

The only thing I would add to their service is to have some way of securing a map or your phone while riding. And when you’re riding electric bicycles, please remember to be wary of pedestrians!

Read more from our adventures:

we can help you!

Do you want to have a positive impact as you travel? Or do you want to reduce your impact at home and transition to a greener lifestyle? Check out our LINKS & RECOMMENDATIONS. Read through our BLOG POSTS to see how and what we do to live as lightly as we can. Feel free to CONTACT US if you have questions or for more personalised answers. And SUBSCRIBE below to our monthly-ish newsletter for more goodness! 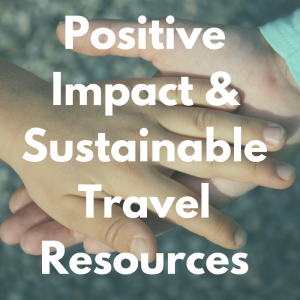 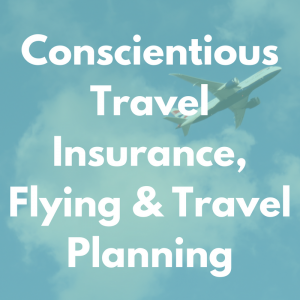 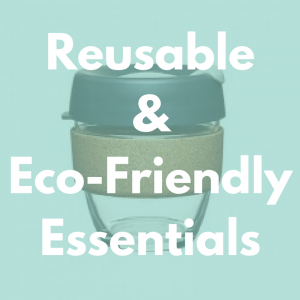 Who are we? Click to read more about us. 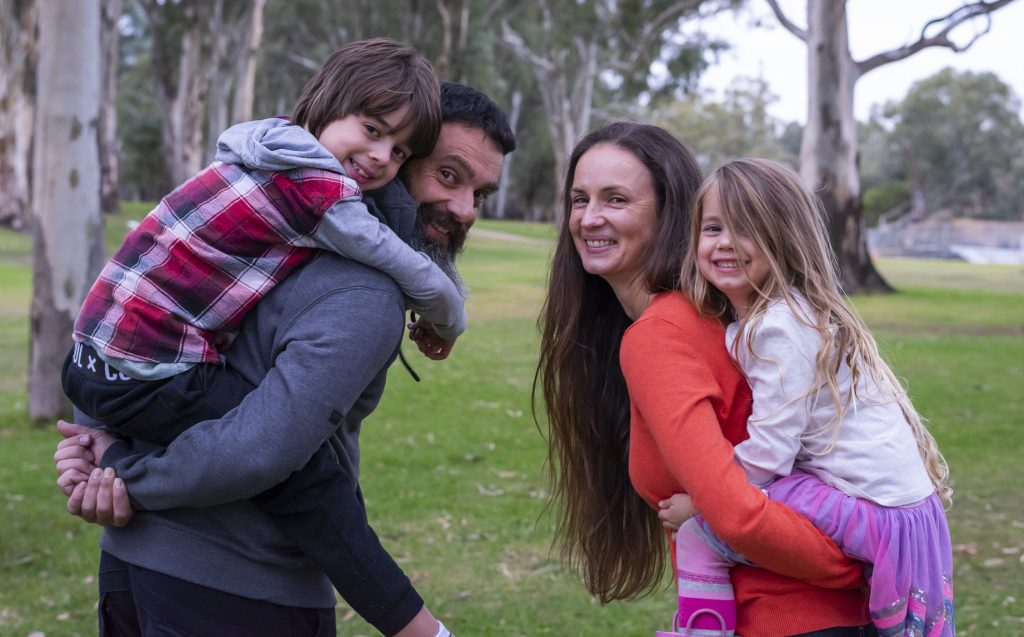 Hi everyone, sorry for my absence lately. The past

I love that feeling of accomplishment when I’ve

Morning all! The fort challenge was great yesterda

Hope you're enjoying the challenges so far! I love

Thanks everyone for participating in the poem chal

Ok, our first challenge is on! Send on all of your

Happy weekend folks! If you're keen, I'd like to t

As Victoria prepares to lock down again on Wednesd